Warning: This review contains spoilers and may contain triggers as the review refers to child molestation.

After the success of Fifty Shades of Grey, numerous books that copied characters and plot were published as quickly as writers could produce them. 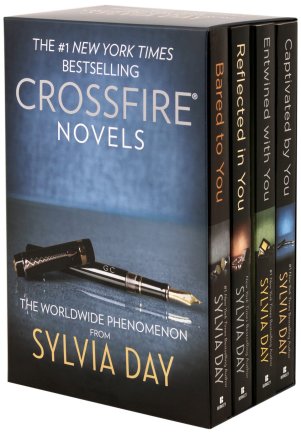 The Crossfire Series is one of these series. comprised of four novels, I read Bared to You, the first.

The book is about Eva and Gideon, how they meet, their issues, backstories, and all their flaws.

You can’t help but compare Bared to You to Fifty Shades by the very first page, and I do not resist. Eva meets Gideon by literally falling on her ass, and later stumbling into his office, ala Anastasia Steele.

Gideon Cross, seemingly owning half of New York, is extremely emotionally damaged, not to mention drooling hot. I won’t waste time going into how much more or less he’s like Christian Grey because it doesn’t matter. Either you liked Fifty Shades enough to read these or you didn’t. So if you liked Fifty but were put off by the poor writing, you may like the Crossfire Series as they hold similar plot elements and characters, but they are better edited.

Eva is also emotionally damaged, unlike Ana, who was just innocent and naive. Eva has a heartbreaking backstory, and anyone who has triggers regarding children being raped and molested by step-siblings should steer clear of this book.

I do find it rather odd that while Eva has been in therapy most of her life to deal with being sexually assaulted at age ten until she was fourteen by her older stepbrother (and her mother only finding out about it because Eva was brought to the ER for a miscarriage), she has a mainly healthy attitude towards sex. I guess she would have to because she and Gideon do it all the time.

As natural pacing of a four book series, we find Gideon also has a heartbreaking backstory as well, but Day does not reveal what it is saving some secrets for later books.

Overall, if you like Fifty Shades of Grey, and want more of it, by all means, give the Crossfire Series a try. I read Bared to You, but I will not be reading the others. Day, like James, counted on emotional upheaval to keep readers turning pages, and all Eva and Gideon do is fight and have makeup sex.

As perhaps someone who is too old to be reading the series, I need more. More plot. More character motivation.

If they truly do love each other, as they say they do by the middle of the book, then the small spats Day gives such weighty importance to should not do the damage they do.

Maybe books two through four will have more . . .  something, but I don’t need to find out.