I am a part of a DM group on Twitter. We were talking about the weather where we live, and I live in Minnesota. I mentioned blizzards and the potential hazards. I said now that my husband has moved out, this winter may be a little nerve-racking as I’ll need to shovel and get my daughter to school by myself. I have to deal with maybe my car not starting or getting into an accident because some moron doesn’t know how to drive on the snow and ice.

I said, “I’m sorry. I know I sound weak. It’s just nice to have a man around sometimes.”

What exactly was I apologizing for? All the women in my group are married to men. They know it’s nice to have a partner, someone around to help.

In our society today, we encourage strong women. We have #GirlPower. Women are encouraged to raise their daughters to be strong and independent. We fight for equal pay. We fight the glass ceiling. We fight for our reproductive rights. We pay our own bills we make our own way.

I write romance. I make sure my heroines can take care of themselves. They have jobs; they pay their bills. Sometimes they’re searching for love, sometimes love finds them. My heroines don’t need a man.

But they want one.

Does that make them weak? 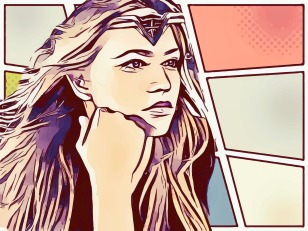 Even in the comics, Diana Prince was paired with various men over the years. The epitome of a kick-ass woman, she still likes to snuggle at night.

I’ve been told, “Don’t make the man rescue the woman.” But isn’t that what a romance is? I mean, rescuing a woman because he has to. It’s part of a mission. She’s been kidnapped because her father is a billionaire. She needs a bodyguard. She’s cured cancer, and people want to kill her. She’s a rock star, and someone is out to get her. There are a million plots to go with that trope. The hero rescues the heroine, they fall in love. The end.

There’s a reason why that trope is popular.

Women take care of themselves (and their children) alone all the freaking time. Reading is an escape. We want our man to step in and say, “Let me take care of this because I’m falling in love with you.” My favorites, and hopefully the kind of books I write, is when they rescue each other. Maybe he can get her to the hospital for her life-saving surgery, but when she opens her eyes, he knows she really saved him, by repairing his broken heart and giving him his life back.

Most times after the “big fight” I have my man go to his woman first. Not because I want to put my woman in a position of power. Not because my heroine wants a man groveling at her feet. But because it’s romantic. It feeds into what women fantasize about. Men saying, “I was wrong. I can’t live without you. I’m sorry. Marry me.”

What I didn’t realize though, is that it takes a strong woman to give a man the space he needs to figure it out and admit that. For him to have time to see his mistakes and go to her.

It takes a lot of bravery for a woman to face heartbreak if the man she loves doesn’t come for her. For her to say, “If he can’t admit he was wrong and apologize and admit that he loves me, I can’t have the kind of relationship I need with him to be happy.”

Women in romance can be kick-ass and still want a man. I’ll never write a sniveling idiot as a female main character.  Men, characters or otherwise, don’t want a woman who acts like that. Women who act like that in real life never find true happiness or true love.

So in my DM, what was I apologizing for? Because in my group, we are all writers and we all pride ourselves on writing kick-ass women characters. How can I write a strong woman character when I, myself, I am not a strong woman in real life?

Maybe not this kind of kick-ass.

I’ve been on my own now for two months, since my husband moved out. I pay my bills with my own money (and a little help from alimony and child support). I work full-time. I’ve always paid our bills so balancing a checkbook was nothing new, I just don’t have as much money to work with. I drive a dumpy car, and it’s not lost on me I’ll have to work a car payment into my budget at some point.

But guess what? I have written characters who have also live paycheck to paycheck. That’s real life.

I have good friends. My sister lives in the same town as me. Even my soon to be ex-husband would help me out if I ever find myself in serious trouble. I’m not alone, and I don’t feel like I am. Our split was amicable, and I haven’t been this happy in a long time.

I am a strong woman even if at times I don’t feel like it. We all need love, security. We all want love, someone to protect us, have our backs. That doesn’t make us weak.

My characters fall in love.

They aren’t weak, either.