I was listening to a podcast today–I know, shocker. I listen to them all the time, and it sure makes scooping the kitty litter a little more tolerable.

I don’t know what I was doing then. Cleaning my bathroom? Sweeping the kitchen? But I was like, wait, what?

Rereleasing a book isn’t a new concept to anyone. Traditionally published authors (or their houses) do it all the time, especially for old books. You know it when you’re reading and someone lights up in a restaurant. You think, I just bought this book at Walmart yesterday. Smoking in a public place hasn’t been legal in years. How the *bleep* old really is this book? Oh, the first copyright was 1982. That explains some things, right? Maybe you keep reading it because the story is good, maybe you don’t because you like your characters to have cell phones and access to the internet, but if you keep going, maybe, just maybe, by the time you read to the end, you realize you already read it–30 years ago.

This is Linda Howard’s Almost Forever.  Kinda different huh? There are more covers between these two. The original was released in 1986.

Again, pretty different.  It doesn’t make the inside change–but would you feel cheated if you bought this book today then found it it was published in 1989? There are other covers between these, too. 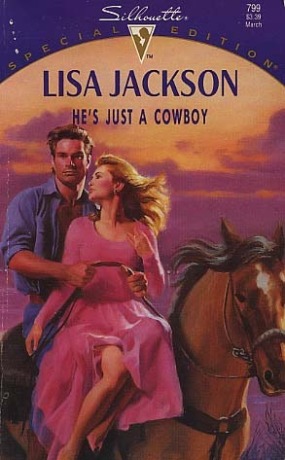 Unfortunately, this is the same book. I never would have known had I not gone on Goodreads and looked for the old cover of Breathless Innocence and found He’s Just a Cowboy. The descriptions are slightly different as well.

I realize there’s a difference between submitting a new file to CreateSpace to fix typos or if you’ve redone the cover and completely redoing a whole book. We’ve all done it. I did it for 1700. I fixed typos, redid the cover, fixed some formatting issues. It was my first book. Mistakes were made.

See, I think of it this way. Your readers bought your crap version. Let’s just call it the way it is, okay?  People shelled out their hard-earned money to buy your mistake-riddled book. Should you have released better, yes. But you didn’t. I didn’t. So people bought it and maybe they didn’t care about the mistakes, maybe you ended up on their author shit-list. That’s on you, and that’s on me.

But say you have some time on your hands and you decide, you know, this book was great, but it’s got a crap-rep now (and maybe the reviews to prove it). I don’t want it to go to waste so I’m going to fix it up. A new title, new ISBN number, let’s fix those plot holes, give the MC a few extra demons, maybe real ones! Yank the old one and let’s watch the sales come in.

Is that fair? Is that fair to the people who bought the first version of your book?

What if you have a decent fan base? Maybe you don’t write as fast as you’d like so when you release a book, people buy it. That’s great. And how are they going to feel when they read a quarter of the way through it and realize that they’ve read this story before?  Yes, it sounds better, no there’s no typos this time around. The cover looks amazing because you learned some things. But . . .

People will think it’s very unfair if they pay twice for the same book. Only authors who have written for longer than you’ve been alive are allowed to do this. You know, authors who have 50+ books in their backlist. Then, only then, are the chances of the same person reading the same book slim. And when publishing houses do this, they are releasing the same book. Authors are too busy writing new material to rework a plot. Their houses are re-releasing books with a new up-to-date cover, and while I may not be too big a fan of that either, it’s a lot better than what we’re talking about here.

I’m not suggesting you don’t fix mistakes. But what I am suggesting is maybe you *don’t* revamp the entire book. Maybe you fix the mistakes, redo the cover, but leave the story and title alone. Leave the ISBN alone. Write a better book next time.

To me, writing is continually moving forward, not back.

What do you think?

You can read another opinion about this here.

(Book pictures were taken from http://harlequinblog.com/2017/05/8-wonderful-contemporary-romance-re-releases-we-love/ and http://www.goodreads.com)

9 thoughts on “When Should You Redo a Book?”