I have to admit, I had a moment last night after my last post where I thought maybe I shouldn’t be blogging about this. Because let’s be honest, my first few attempts at doing a book cover didn’t go so well, and they didn’t prove I should be the one to tell you what to do. But I did try again this afternoon, and with a little patience, I am proud of what I came up with:

I’m actually going to keep this one around because I do think I’ll end up using it. I love how all the colors blend together. The woman looks like my female MC, the guy is cute (some of those guys in the stock photos are NOT all that cute, LOL), and it looks more like a traditionally published book cover would look. I wish maybe the path would have had some people running on it–that would have tied in the title to the story a little better, but that’s okay. I tried to look for one, had even thought through all my searches that I had found one but didn’t bookmark it. I’ll look for it some more.

Anyway, how I did it was I started with a “base” of a texture that I found off Pixabay. I searched blue dots, and found something I liked:

But I realized the colors were too bright, so in the picture tools, I made them grey and white which meshed with the people better. I still needed text boxes to put the couple, the trees, and then the title and my name. I fiddled around with the placement of all three until I was satisfied. I don’t know if a person can be 100% satisfied. It’s rather like reading your work over and over again and noting all the things that you would change.

I don’t mind posting my struggles on here because I want you to know that 1) I don’t know what I’m doing, but I still don’t have to pay someone to help me, which, maybe it shouldn’t be, but is a huge pride thing for me, and 2) NEVER publish your first attempt. I went from this: 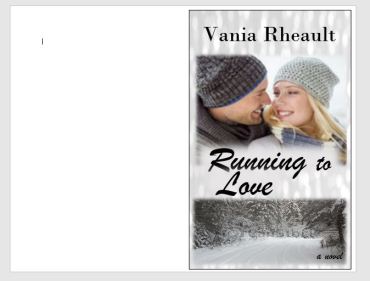 And the difference is incredible. I didn’t ask for any extra help, I didn’t look on any blogs for extra tips (though I strongly encourage you to do whatever you need to do to create a pleasing cover). It was just me, some stubbornness, and some impatience, or patience, however you want to look at it.

I know I said this story takes place in the fall, and it does. It goes from October until February, so using a winter theme for the cover is okay. I could easily go with an autumn theme too, but the cover you end up with can vary greatly with the photos you find and can pay for.

I’ve been doing a little digging around with templates, so now that I’m satisfied, I’ll write about those next. I promise.