Humans are creatures of habit. We like to park in the same parking spot every day, be it at work, school, the shopping mall. We buy the same seat locations for movies. We use the same person at the salon.

It’s the same thing for the people we interact with. We all have that friend from elementary school, we brag we’ve been married for 10+ years, we’re still in touch with college professors, even though you’ve been graduated for twenty years. We latch on to people, and we can’t let go.

That kind of behavior can sneak up on you, and maybe it takes years. And maybe that person is so fully ensconced in your life that booting them to the curb seems . . . maybe a little too dramatic. I mean, after all, it’s not really harmful they treat you that way. Is it? If they hurt your feelings, that’s not on them, it’s on you for being too sensitive. Because she did do that one thing for you a few months back, though it was a couple weeks too late, and you didn’t need it by then, but she made the effort, right? 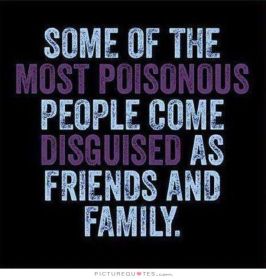 Maybe you’re part of a group, and others can’t see her for what she is, and if you extricate yourself from the group, you won’t just be rid of her, but you’ll lose a couple of good friends.

And maybe, this is what will always be in the back of your mind, WHAT IF SHE TREATS OTHERS BETTER THAN SHE TREATS YOU.  That this isn’t just her personality, but something personal she thinks and feels toward you? She kicks you, and you come back for more because that one thing was a fluke, and she’ll never do it again. Only, she does. But they are small things, a back-handed compliment, a comment that doesn’t quite sit well with you, but maybe you’re touchy because you’ve had a bad day, and you keep brushing them off.

The thing is, you’re not imagining this stuff. It’s how that person is really treating you. Once you can face it, once you can fully understand that it is HER and not YOU, you need to figure out what to do about it. This “friendship” has probably been years in the making, and you just realized after one too many pretty insults that you can’t take it anymore. But she’s a major stakeholder in your life now. You talk all the time. Your kids have playdates. Maybe your husband is best friends with yours. These are real-life examples, but I’ve been burned by people I’ve met online. Sometimes dumping someone in real-life is easier than online. You stop answering texts, you stop going on double dates. If it’s your daughter’s best friend’s mother, think of it as a favor to your daughter. How is your daughter’s friend going to grow up with a catty woman like that for a mom?

No, online is a bit different because I’m swimming in an aquarium of writers (sometimes there are sharks in there!), where everyone knows everyone else, and cutting someone out of your life means not knowing what they are doing anymore. Professionally. You don’t want to miss what they are going to do next, what kind of contacts they make. Because not only could something they know help you, it could elevate your career to the next level. And this isn’t a joke. Networking is important. It’s important in any career–it’s why all industries have conferences, retreats, etc. So this isn’t in your head, and it’s okay to have FEAR OF MISSING OUT when you think of cutting someone out of your life.

But honestly, how much of a career will you have if you are not taking care of your mental health? Being a writer is hard enough as it is without having to suit up in armor every time you jump online.

Here are a couple tips to help you sweep out that pesky person who just cannot be nice.

Fear of missing out is a real thing, but it’s still just in your head. It comes from being chosen last during gym class at school, or your friends ganging up on your on the playground. It comes from people flocking around a writer who just got an agent, and you feel left out in the cold. No one wants to be excluded. But the fact is, no one puts all their problems online–you only know the shiny parts, what they choose to display. Insecurity, jealousy, and fear are probably three of the main reasons your “friend” treats you the way she does. That’s not an excuse but a reason. Maybe she has a serious case of writer’s block, and she hasn’t written for months, or maybe sales weren’t what she thought they’d be during release week, and she’s jealous of your KU page reads. It could be anything. But the fact is, you don’t have to put up with it.

You don’t need to burn bridges or start tweeting or posting derogatory things about her. Or tweeting subliminal tweets about how good friends should behave. You don’t even need to unfollow (on Twitter) or block. Facebook makes it easy to stay friends with someone but not see their posts anymore. Unlike her author page. You can be a grownup about it; just stop engaging. Because you and she are both part of a community, and there’s no point in slinging mud. Be civil. Chances are she may not notice. Chances are she has a lot of friends and a few weeks of distancing yourself may just do the trick because she’s friends with a lot of different people.

Probably the biggest piece of advice I have for you is this: social media is good for networking, for getting to know people, for learning the tools of your craft and business, but overall, social media doesn’t sell books. If you’re in it to sell books, you need to write more and find ads and promo sites that work for you. Networking can help you do that, but that’s all it has to offer. Social media can be a support or a distraction, but it won’t skyrocket you to bestseller status. Only you can do that, in front of your laptop–writing.

Do you have other tips to help ignore or get rid of toxic people in your life? Let me know!

3 thoughts on “Toxic People–How Do We Get Them Out of Our Lives?”