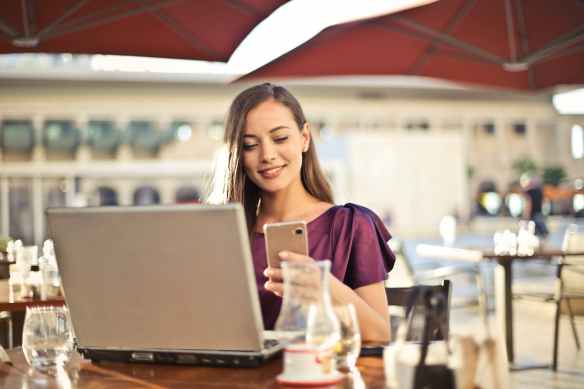 She looks happy–she must have gotten her issues worked out. Photo by bruce mars on Pexels.com

As a business owner, you have to do some things you don’t wanna do. Switch graphic artists for your covers if yours isn’t working out. Fire your virtual assistant if you’re paying them to hang out on Facebook instead of doing what they’re supposed to do. Running your own business can be unpleasant. And one of those unpleasant things is having to make a phone call.

You all know I’m right. Calling sucks. But it’s so much more efficient than sending an email or doing, you know, nothing, and complaining about your issue instead.

We all have a love hate relationship with Amazon. Love them for letting us get our books into the world, hate them for making the process difficult (I’ve heard lots of complaints about KDP vs. CreateSpace and printed author copies that don’t look good, to name a couple of issues). But you have to take the good with the bad, and well, not having gatekeepers is pretty damned good, I say.

But you definitely have to deal with the bad, and I had to call this morning to figure out what in the heck was going on with my ISBN numbers and my imprint.

I bought a pack of ten ISBN numbers not long ago. I am the publisher, because I’m me, but I also have an imprint I created with mystery/thriller author D. R. Wills. Not only is he a fellow writer, he’s my fiancé and we’re getting married next year. That has nothing to do with the story, I’m just happy.

Anyway, we’ve had this imprint for three years, and I’ve published all my books under it just fine until yesterday.

I’m trying to upload my files for books one and two of my series and order proofs. It’s a common thing for us indies, right? But I had to call this morning because I kept getting a warning/error message saying that my ISBN does not match my imprint. Why this is happening now, I have no clue, so I called KDP, or rather requested they call.

This is where you look to get a call back:

Click on the unhappy face in the upper left hand corner. I go this route so you’re still in your bookshelf in case you need to reference something while you’re on the phone.

Choose the best way they can help you.

I chose ordering proof copies because that was one of my concerns, but they’ll help you with anything once you get them on the phone. 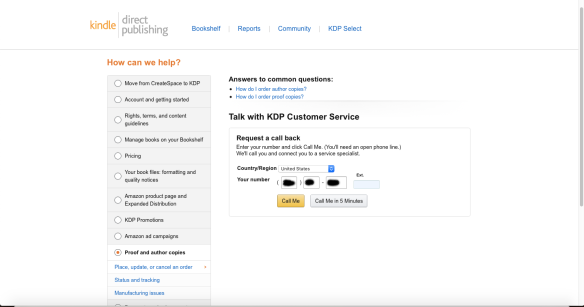 If you choose CALL ME RIGHT THE F NOW, be prepared for them to call you right away. I was still untangling my earbud cords when my phone rang.

All the reps there are very polite, and you should be polite too. It goes without saying that the rep who is talking to you is not responsible for the problems you’re having with your books. Remain friendly, and they’ll be friendly in return. And besides, who knows how they can mark up your profile. You don’t want them noting your account that you’re a big dick because then other reps won’t be so happy when you call in with something else that needs attention.

Anyway, so I did ask about why I wasn’t able to order my book proofs right now, and he said they were having system issues and no one is able to order proofs or author copies at the moment. He said they had techs working on the problem, but I didn’t ask if he thought he knew when the issue would be resolved. I figured it’s Christmastime, and I’m not going to bother to order proofs until after the new year. There’s no point in banging my head against the wall.

Then I asked him about my imprint issues. I bought a pack of ten, and listed the imprint as Coffee & Kisses Press. I’ve been publishing this way for three years, and never had a problem until now. When I talked to Kyle at KDP, he said my imprint name is actually my name. He suggested I call Bowker (My Identifiers). So I did and was amazed I didn’t have to wait on hold forever. The rep at Bowker said that the reps at KDP have limited information, and they see my name as the publisher name and that’s all. So if I really need to list my imprint name as the publisher, I need to screenshot my account information on Bowker and send it to KDP.  I asked him if I would have to do this for every book I publish and he said yes.

Now, I know you’re going to ask me two things:

The answers are simple, my vices are chocolate and champagne, not purses, and no, it’s not that important.

I buy my ISBN numbers for the protection I feel it gives me and my work. I know some authors do the copyright thing, some don’t do anything accept take the numbers Amazon gives them, press publish, and walk away. But I want some control over my work, so I protect my books with ISBN numbers. I don’t know if this makes a lick of difference, or if I’m just wasting money, but I’ll probably always protect my books with ISBNs. I don’t apply for copyright . . . I email myself as a backup, and go with the “poor man’s copyright” that way. But at least there is a record that the work is mine, and I paid to have that work be considered as mine. In some other countries, it’s not even an issue. Like Canada, for example, ISBN numbers are free. It’s the United States that has to make everything for-profit, or this wouldn’t be a problem. It’s the fact that they are so dang expensive, too, that makes it hard for authors to afford them.

It doesn’t make that much of a difference who is listed as the publisher of my books. I’ll keep the imprint on all my stuff. That won’t change. And Coffee & Kisses Press is listed at Bowker as my imprint, so officially that hasn’t changed, either. Sometimes you just gotta lose a few battles to win the war.

Anyway, so I got the answers I needed, and for now my series is stalled out. I’m waiting for two betas to get through books three and four, I still have Autumn’s blog posts to write, which I will this weekend at work, (though I may not get through all of them), and proofing the proofs is really important to me this time around though I don’t know why. I’m just going to keep listening to my gut.

And what does this mean for paperbacks? I know Amazon’s preferred method is Kindle books. And not just Kindle–they love it when you’re in KU, and they love readers who read books from KU. Author copies and paperback sales may not mean that much to them. Especially since that’s the old-school way of doing things, and Amazon is all about moving forward.

Some indies don’t bother with a paperback version of their book, and that may be a decision more indies are going to have to make as time goes on.

So what can we learn through all this?

Hopefully what I found out has helped some of you. If you’re having an issue uploading your files and you’re getting an error message about your ISBN and imprint name, more than likely they have your name listed as the imprint name because you are the publisher. I changed my imprint name from Coffee & Kisses Press to Vania Rheault in the imprint field in my KDP dashboard, and it all worked.

I’ll have one more blog post on Monday, and then I’m going to take a small break for the holidays!

Have a good week, everyone!