The other day, I got into a little spat with a couple people in a Facebook writer’s group. Someone announced that they had just published their book. There were a lot of congratulations, but there was one woman who felt the need to edit this person’s post. Yes, there was a typo in it. But it was clear this person hit the comma on their phone instead of the spacebar. No harm done, right?

The fact that she called him out on it wasn’t really what bugged me–it was the fact that her own post had a typo in it. All this poor guy did was post he’d published a book. That’s all. So why the need to attack him? I usually let this stuff go, but the fact she did it with a typo herself made me jump in. 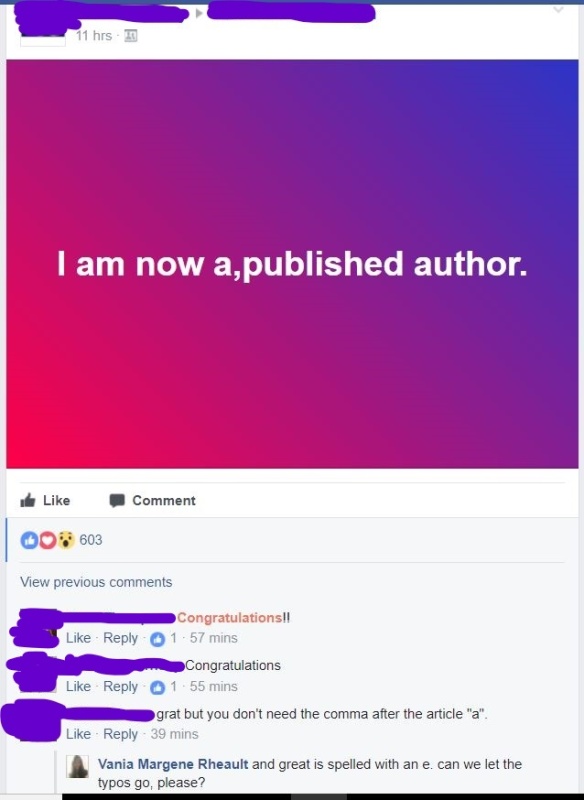 But like all good catfights, it didn’t end there: 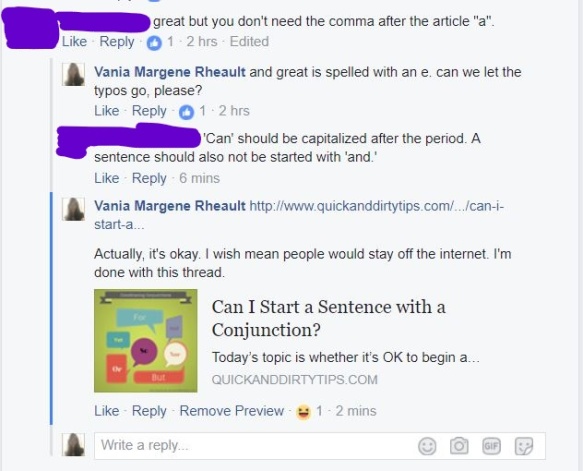 Did you notice that the person corrected her typo? I wanted to tell her that correcting her typo didn’t make her comment any less bitchy.  The person correcting my comment was someone different, but I like to think I got the upper hand there, too. Know your grammar before you begin correcting people, or you’ll just look like a fool, and yes, it is damaging to your online presence.

I’m trying to figure out why people need to be so callous. It came to me in the shower (where all good ideas do).

We jump on each other because we’re insecure and jealous. These people probably haven’t published anything, and they felt threatened by this person’s announcement.

Does that make it okay? No of course not, but I think it does point out something no one likes to talk about: competition.

Writers support each other, that’s a given. When we’re writing.

There are only so many publishers/agents/bookshelf space to go around. Whether we like it or not, we are competing for prime real estate.

So when we feel like people are “ahead of us” in some way, be it a new marketing trick, or what????!!!!!! . . . they just put out another book? It can feel disheartening, and it can make some people,  frustrated.

But you know what? It’s okay to have those feelings. We all feel them. Yes, I support all my writer friends; yes, I want their books to sell.

I want my books to sell, too.

You can admit that–in a dark little corner of your soul. It’s okay. It’s natural that if someone is choosing between your book and someone else’s you want that person to choose yours.

But it’s what you do with those feelings that matter.

Don’t: attack people online; in the end, it only makes you look bad
Don’t: not write because you feel it’s hopeless
Don’t: stop supporting your friends because they make you feel inferior with their progress or sales

Do: turn those feelings into productivity and work harder
Do: trudge through those feelings and support your friends anyway (Jennifer Probst has a wonderful section on this in her book Write Naked which you can find here.)
Do: keep those feelings to yourself, or confide in someone you trust who won’t turn on you or blab behind your back.

The guy who was put down in that thread PM’d me to thank me for sticking up for him. I have been known to stick my nose in a few places where it doesn’t belong because I’ve been on social media long enough I don’t give a f*ck what people think of me. If I see nastiness, for the most part, I’ll call you out. There’s no need for it. We all have one goal: for people to read our work. Being nasty online is counterproductive to that. You can bet I’ll remember those two women, and if they ever publish anything I’ll look the other way.

Speaking of memory, I remember Rebecca Thorne posted a little something about this during her experience at the Dallas Writer’s Conference in 2016. Must have stuck with me to remember a blog post from over a year ago, and you can read it here.

After I defended my use of and at the beginning of a sentence, I left that group. I don’t need that kind of negativity in my life–and I certainly don’t need to waste my valuable time defending idiots who just won’t get it anyway.

You can be supportive and still want to do well for yourself.

And for those other two, karma’s a bitch, baby. 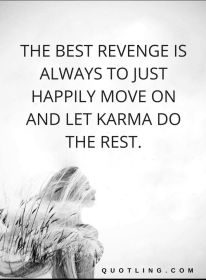 Let me know what you think!

8 thoughts on “Competitiveness. Let’s Not Talk About It”