This morning I was reading a blog post my by friend, Sarah. It’s her book baby’s birthday today, and she’s celebrating her book turning one! And while I admit I’ve never celebrated a book’s birthday–hell, I rarely announce a launch–her blog post encouraged me to take a look back at my publishing milestones.

I don’t have my publishing dates memorized or anything like that, so I’ll need to go on to Amazon and take a look: 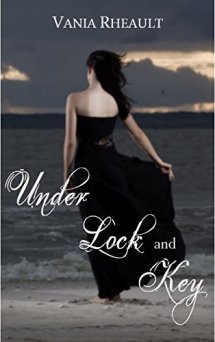 I thought The Corner of 1700 Hamilton was my first book I published, but according to the dates, I actually published Under Lock and Key a week before on July 7th, 2016. It’s a novelette that I wrote from a writing prompt a dear friend of mind, Liz, tweeted one day. I haven’t read it for a long time, and no doubt it needs another edit. When I go wide, I’ll put it everywhere for free. It’s gotten some so-so reviews, but I can’t expect anything too great as it was the first thing I published. 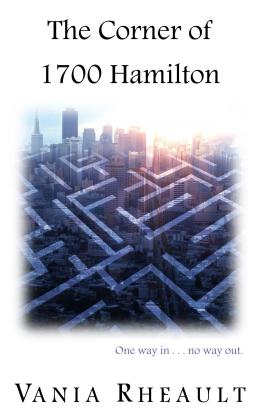 A week later, I published The Corner of 1700 Hamilton. This is a trainwreck of a book, as first books are wont to be. The original cover was horrible, and even with a beta reader and an editor, it still wasn’t up to par. Recently I went through one of my old paperbacks and edited both novellas, but I’m not sure if or when I’ll ever put them in. Even the “new” cover needs work,  but my mantra has always been “always look forward.” Having a sub-par book for sale doesn’t make me want to celebrate, however. So I may try to find time one day to fix it up.

I was still in novella mode when I decided to try my hand at erotica, and I wrote six novellas back to back for a total of (approximately) 155,000 words. I wrote all of them at once, hired an editor and published them together. Summer Secrets is about a group of friends who have sex, party, fight, and make up at a small lakeside resort during their summer vacation. For what they are, I’m actually quite proud of these; I had found my voice, and the interconnecting plots stand even without the sex.

Summer Secrets was a lot of work, but they made me a better writer. While I won’t be writing any more erotica, I don’t have any regrets taking the time to write these. They were published in August, 2017. I guess I didn’t realize I took a whole year to write them, edit them, format them, and do the covers, but at 155,000 words, I guess that’s not so bad, either. I redid the covers not long ago, and reformatted the insides using Vellum. I was even able to add the embellishments I tried for the first time around. They are pretty, and it’s too bad they aren’t in a genre I want to write anymore. I don’t consider them part of my backlist, but I won’t bury them the way I kind of blur over 1700 when asked about my backlist.

The covers look better, and the paperback covers look a lot nicer. I’ve learned a lot in the past three years, and I think it shows. 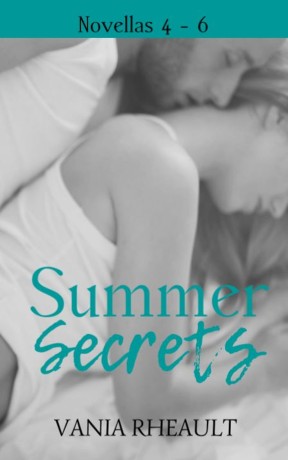 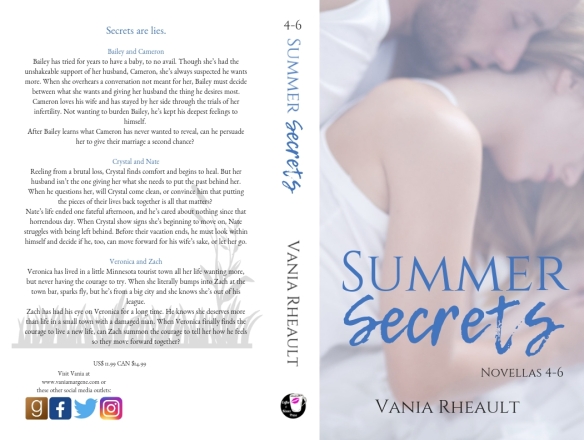 I had Don’t Run Away done while I was doing these, and I can’t even say when exactly I fixed it up and decided to make it a trilogy.  I published the first on November 17th, 2017. I do remember while Summer Secrets was being edited, I wrote the second book of the trilogy. Later that became Chasing You which was published on December 14th, 2017. Running Scared was published in January of 2018. All I can say is when I look at those dates is holy crap. It helped I had Don’t Run Away done, and that was one tough book. It went through a lot of edits. I added POVs, took them out. Rewrote large sections. This was before I started listening to my novels as part of my editing routine, and I have no idea after the first one was beta read/edited, what I did with the others. I think by then I was confident in my own editing skills, but I doubt I was at the point I am today.

At any rate, they do okay, and during a Freebooksy ad, I gave away over 4,000 copies of Don’t Run Away. That promo led to the first wave of readers whom I hadn’t met via social media (AKA strangers), and I’m happy to have done it. I also proved that even though it feels like a quilt, all patched together, the book was strong enough to get decent read-through to the others. If you want to read about my Freebooksy promo results, look here. If you want to read some of my reviews on Goodreads, look here.

The best lesson I learned from writing the trilogy is to MAKE THE FIRST BOOK STRONG TO ENSURE READ-THROUGH. It won’t matter how many books you have in a series if your first book won’t carry them.

I’ve redone the covers, though they aren’t a drastic change, and I reformatted the insides using Vellum.

I can tell you I was done with those characters by the time I finished Running Scared, and I didn’t think I’d ever do another series. I don’t want to say I was bored, because what would that say about my writing? But I will admit it’s nice to move on.

Wherever He Goes was published on June 1, 2018. It was the first stand alone novel I’d ever written–up to that point, even my novellas had been connected stories. I haven’t done much promo for that, though I did do a paid Bargainbooksy that didn’t do anything. Looking back at stats, I don’t even think the sales paid for the promo. If you want to look at my blog post about my results, look here.

There were a few firsts with this one: I had more beta readers, and I did the entire paperback cover in Canva. It looks amazing, and is still one of my favorite covers to date. I’ve had good feedback about the novel, and I enjoyed writing it. I need to do more promo for it, as I think it’s an enjoyable contemporary romance that should have more readers than it does.

All of Nothing, I feel, is my strongest book to date, and I believe in it so strongly, I entered it into the RWA RITA awards contest. It can more than hold its own against some of the traditionally published books out there, and when I did a Freebooksy promo for it, I gave away over 6,000 books. (If you want to read about those results, click here.) I love the way my ad for it looked in their newsletter, and bless them for making it the first book! 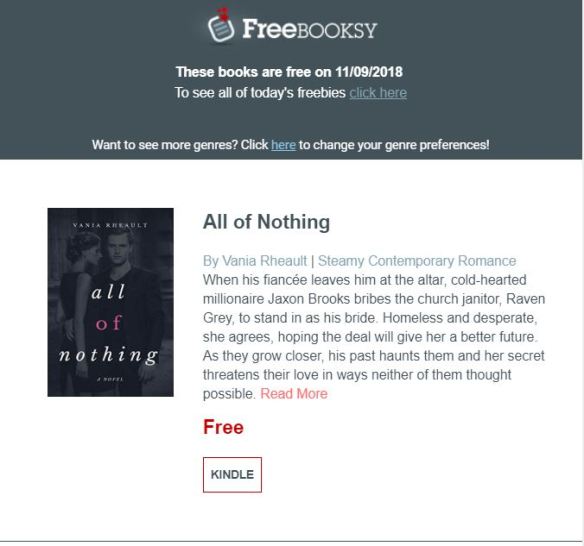 It didn’t place as high as Don’t Run Away on the free lists, simply because they are in separate categories. (Don’t Run Away is a sports romance.) But the book has more reviews than any other of my books. Published on October 16, 2018, it took me four and a half months to write it, edit it, format it, and release it. I had it beta read and proofed, and I’m very proud of how it turned out–from cover to cover. 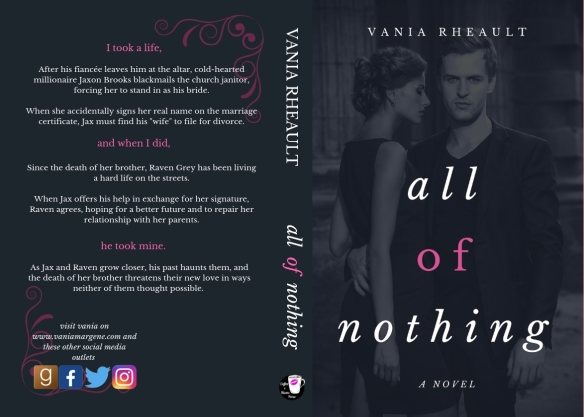 I don’t have any more published work out right now, though The Years Between Us is finished. I could have had it published already, but I’m working on a series that I won’t release until they are all done. I’ve been taking my time editing The Years Between Us, but at 74,000 words, it is a complete and finished novel. I don’t have the full cover completed, nor has it been fully edited, but I do plan to have it out into the world maybe by the end of March, or early April. There is no rush, as I don’t see my series being released until Christmas of this year. The first draft of the first book is finished, however, though I admit getting out of my recovery rut has been harder than I expected.

Anyway, so looking at those dates, seeing how hard I’ve worked . . . what have I learned through these two and a half years of publishing?

Thanks for sticking with me–this is probably one of the longest blog posts to date. I doubt I’ll do a recap again; as my backlist grows, it will just get too time consuming. But the look back was fun, and thank you again for joining me!

If you  want to read any of my books, you can check out my Amazon author page, here.

Wherever He Goes and All of Nothing have recently been added to Kobo, and you can find them here and here.

4 thoughts on “Book launches, book anniversaries and other musings about three years of hard work.”